05 Jan 2017
Assuming we get some iPad specific updates in the forthcoming iOS 10.3 releases, here's what I'd like to see

Many people (including me) are assuming Apple’s sticking to last year’s release cycle, and iOS 10.3 will have some new iPad only features.

I’m feeling pretty productive right now using my iPad Pro to make this site, but there are definitely improvements to be made.

None of these are very clever, but be interesting to see what we do get - if anything - in the next few weeks.

I think everyone agrees the current way of changing which app is shown in split view is really poor. 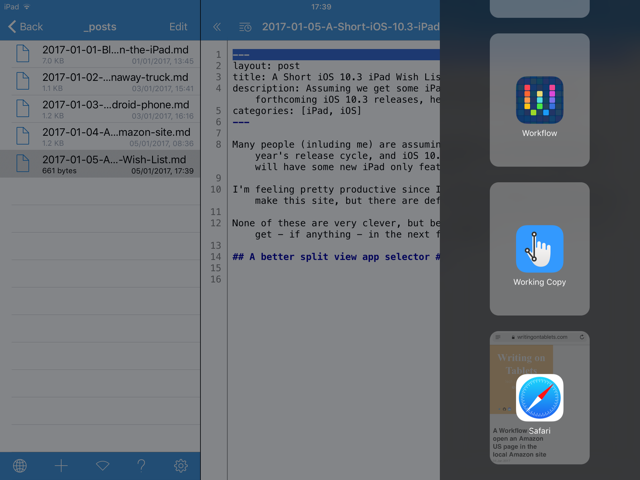 The list of apps, in order of last used, really doesn’t scale when you’ve loads of apps you use regularly.

Even just having a search filter to quickly find the app you want would be better, but there must be a better way than this. @viticci’s suggestion of having a view similar to the home view makes sense, especially if you can chnage the order app icons are shown in split view.

Estimated probability: 100% (of something happening)

PiP video is great, especially for big sports watchers, like myself to be able to watch the game in the background while doing something else.

However developers have to update their apps to support PiP, and not everyone has done that - in particular I’m looking at Sky in the UK and their woeful support in their Sky Go and Sky Q apps.

Surely if the video is being shown full-screen there should be a system level facility to let me make it PiP, rather than the developers having to opt-in?

The most common use for me of having 2 apps running in split view is transferring information between them - very often copy and paste.

Be very nice if there was a simpler way of doing this. Maybe drag and drop between the apps, or maybe an automatic option to be able to paste into the 2nd app what is highlighted in the 1st app?

I’d be happy with any of these being implemented, and will be a bit disappointed if none are. However recent Apple missteps don’t give me much confidence right now 😏