2016 was a pretty depressing time on social media. So much political upheaval both here in the UK and the US - mostly in a bad way - has meant all sorts of problems with trolling, fake news, isolation in political bubbles. etc. etc.

Clearly I can’t do anything about these problems for everyone, but I can try to be more selective in how I use the various networks to get a more positive experience for ME.

I miss Twitter cards, don’t really miss seeing Votes and had completely forgotten about Moments until I looked at the official app just now.

What I love most about Tweetbot is the filtering feature, which lets me block certain words or users. Just implement the 2 things in the image below has restored a little bit of sanity to my timeline. 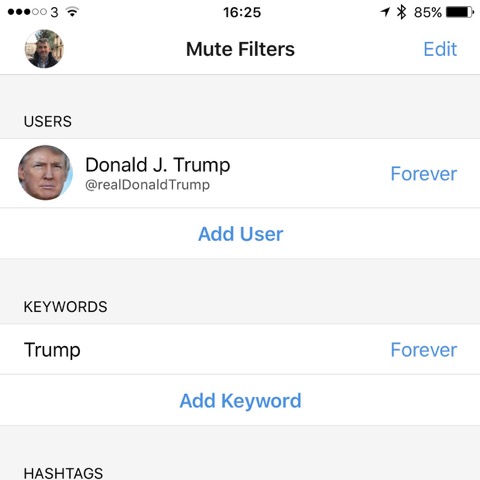 One thing Tweetbot has encouraged is reading every tweet in my timeline, so I thought it would be a good time to stop following people who I’m not interested in any more.

I spent a day reading every tweet, and removing people whose tweets I’d been regularly skipping. I also went through the complete list of people I was following and I didn’t why (or indeed who they were!). There were quite a few obsolete accounts too.

All in all I’ve removed about 20% of my following list, and will try harder to be more selective who I follow, or be more ruthless about removing people.

I’m not sure if I’ll be in more of a bubble or not going forward, but right now I don’t really care.

To be honest I very rarely go on Facebook any more. I was a pretty early user, starting in 2006 when my friend Kurt invited me to this new thing only just open to the world.

4-5 years ago I used Facebook a lot, as many of my friends were also actively posting interesting stories. However many of them were also early adopters, and I think we all got a bit bored of sharing so much.

That meant in general the quality of posts I was seeing declined, and as more friends were coming online, the interesting stuff was either being swamped in the deluge, or in more recent years being filtered out by Facebook’s aggressive ranking algorithm and insistence of forcing it on me.

Last year, as an experiment I started on using Facebook only on Friday, and once I’d broken the habit/addiction I’ve pretty much stopped using it since.

What I’ve done today is go through the notification settings, and really dial back everything to the bare minimum. Facebook are terrible at updating their badge number/sending you app notifications for stuff you have no interest in, especially if you haven’t used the app much recently.

I have lots of friends who work at Facebook who I have a lot of respect for, but the company as a whole is really cynical at doing whatever it takes to try to get you to open their app.

I doubt whether I’m a typical user, and I see lots of people who still spend tons of time in Facebook. However I do think as more and more people reach 10 years+ on the platform, they’ll reach the same fatigue with it as me and it will just become more of a place for wishing Happy Birthday to people once a year.

Again I used to love Instagram, but seem to use it a lot less recently.

It was always the most positive of networks, just nice pictures you could like without it meaning too much and very little/ no negative comments.

However Facebook seem determined to compete with Snapchat by changing Instagram to steal its’ features, which seems really misguided. Even though it hasn’t really changed much, as it’s easy to ignore the stories (and in my feed no-one uses the Snapchat-style editing), strangely just knowing those crappy features are there has devalued the whole product a little.

Also, getting so many spammers as followers (although maybe this has got better recently?) turned me off the platform a bit.

I also may be a bit biased after the Instagram API changes to discourage 3rd party apps ended my Pixagogo app. Not really bitter, but another signal that Instagram was concentrating on making money at some expense to the quality of their offering. Completely understandable, but a shame.

I while back during the Stories launch, I did a cleanout of many people I didn’t actually know IRL. The amount of irrelevant stories I was seeing irritated me, but now I rarely look at any stories at all. Maybe I need to follow more great photographers again.

I actually like Snapchat, but I’m too old for many/any of my friends to also use it, so not much point in me opening it up much.

I’m hoping these changes will make a more positive online 2017 for me. I get lots of value from social media, but the networks are so prevalent now I think everyone needs to be thoughtful about how they use them, so they continue to provide the tremendous and positive benefits they can do when they are at their best.

Be interesting to see if any of these changes have any effect.