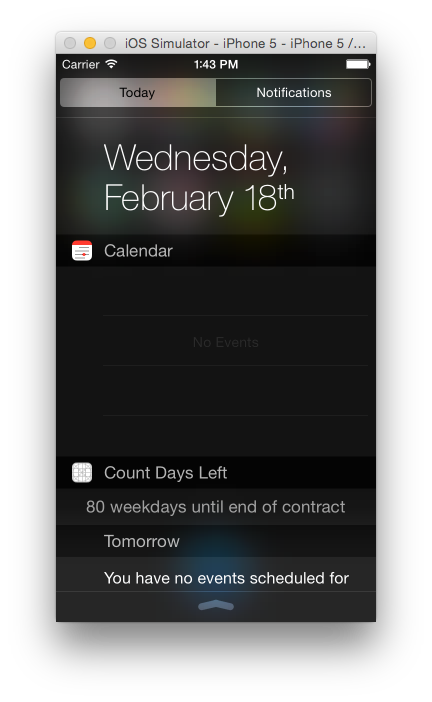 Now we have the data model code ready, we can start building out the UI for the app.

Working in storyboards, there is obviously very little difference doing this with Swift ViewController code rather than Objective-C, especially with such a simple UI. 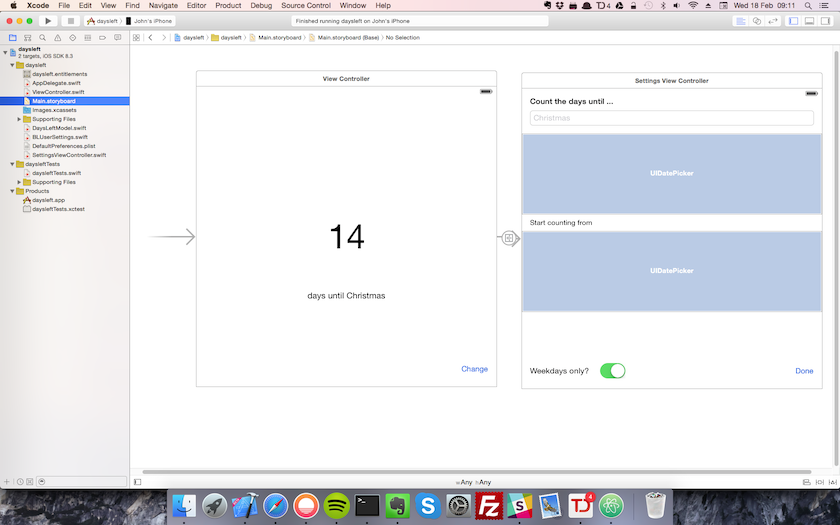 As you can hopefully see from the screenshot of the storyboard, there are just 2 views in the app - one to show the number of days left, and a settings view where we can edit the values in the data model.

Later on we’ll come back to this to make the views look a bit more polished, but I just wanted get the app up and running first before tackling some more slightly interesting problems.

There’s not a lot to say about the Swift code here as it’s pretty simple. However there were a few things that puzzled me a little during development that I thought I’d capture here.

I didn’t know the DatePicker control has a fixed height, which made it very confusing at first as my initial attempts as restricting the height using AutoLayout constraints just didn’t work. There are ways you can change this using frame size manipulation but I wasn’t happy with doing that in my first pass. I’ll revisit the layout of the settings page later.

Also I’d forgotten how to handle hiding the keyboard when the focus goes off a text field (or when the user presses return on the keyboard). As I’m sure you know the secret is to fire a self.view.endEditing(true) in a touchesBegan event handler, and also implement the UITextFieldDelegate and add the endEditing call to a func textFieldShouldReturn(textField: UITextField) -> Bool method as well

Add a widget to Today notification screen, which will involve a little refactoring of the code to make common elements shareable

Next stage of the app is to store the settings we previously added to both the local user settings and to iCloud for syncing across multiple devices.

Luckily I had some Objective-C code I could repurpose for most of the logic, but porting it was a useful exercise in getting used to the slightly obtuse casting syntax necessary in Swift when interacting with the frameworks.

To enable storing key-value pairs for the app in iCloud, it’s as simple as going to the Capabilities section of your project settings, and:

Code to get and set preferences

The code - available on GitHub for viewing - is reasonably straightforward port of some common code I’ve used before.

I’ve refactored the main settings code into a BLUserSettings.swift class I should be able to reuse in other projects. The existing DaysLeftModel class now inherits from this base class, and the getters and setters have been changed to call the appropriate read/write methods in the base class.

The getters will read from the local user settings, so they’ll be available even if the device is offline. The setters will write to both the local store, and the cloud store, and the base class also handles notifications if the settings have been changed on a remote device, and writes them locally as appropriate.

Having a bunch of unit tests as always helped to test my refactoring of the model class worked fine.

I think we’re now ready to start on the UI.

As per my previous posts, I’m developing an iOS app “in the open” using Swift as a learning experiment. It’s going to be an app that counts down the days to a future date.

I thought a good way of getting started would be to work on the data model code. There would be more pure Swift code to write to get up to speed on the syntax, plus I’d get the chance to write some unit tests too.

The data model design is pretty straightforward; I want to have the following properties to hold the settings data:

Then there are three different access properties/methods to calculate various day lengths:

Writing a simple class to implement this logic was pretty simple even in a new language, although a few things were a little strange at first in Swift.

Semi-colons at the end of the line are optional in Swift, and a few references I found seemed to say best practice is not to add them, although muscle memory from Objective-C and C# made this hard to do.

Also integrating into the IOS Foundation classes was a little strange in places especially the use of optional values. For example, note the ! at the end of this line

My model.start is of type NSDate i.e. can’t be null, whereas dateFromComponents() can return a null value, so the ! forces this to actually return a value (I think!). Not the most intuitive, but thankfully the Xcode editor prompted me to add the exclamation point.

The other problem I had initially was being able to reference the DaysLeftModel class from my unit test code. I couldn’t figure out anyway of importing the model code, before this very helpful blog post by Andrew Bancroft pointed out the way of configuring the build settings to automatically create a module.

For the date logic of calculating the difference between two dates ignoring weekends was a little tricky, but as usual the Internet was my friend and with the help of TDD and the algorithm outlined in this article by Alec Pojidaev I managed to get it working correctly.

So I’m happy to be up and running in Swift, and the code is up at GitHub if you’re interested.

I think I’ll next tackle storing these settings in a local datastore, as well as synching them with the cloud to share across devices.

I’m currently in-between contracts, so as promised last week I’m going to try developing a new app in Swift "in the open" and see how we get on.

My idea is to write a simple app that basically counts down how many days left until a certain date. This was inspired by the fact that in my last contract I used a spreadsheet to count down how much I had left to go (it wasn’t that bad really!)

I wanted something simple enough that could be completed in a few days - even though I know very little Swift before starting - and could be extended into an Apple Watch app.

Now there are hundreds of similar apps out there in the app store already, so this isn’t going to be groundbreaking in any way, but hopefully when it’s done it’ll find a small audience.

Before starting coding, obviously I want to do a little planning.

I’m very much a believer in doing just enough planning to get started along the right path, and if I had a test team enough information for them to understand what the app should do (but no more).

I’ve finally broken into my Evernote Moleskin notebook to sketch out a mini-design for the main app, and used the Evernote Scannable app to snap a picture: 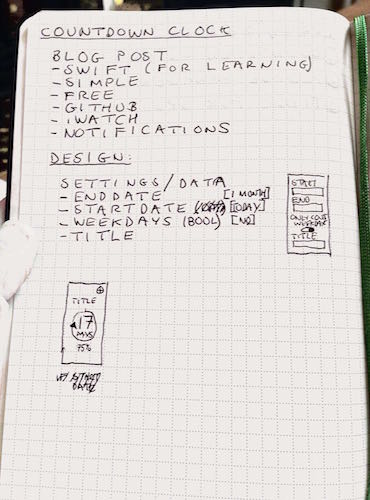 More usefully, I’m tracking the actual tasks in a Trello board which you should be able to see if you’re interested.

The initial tasks on the backlog - in probable order of development - are: